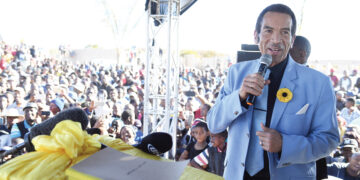 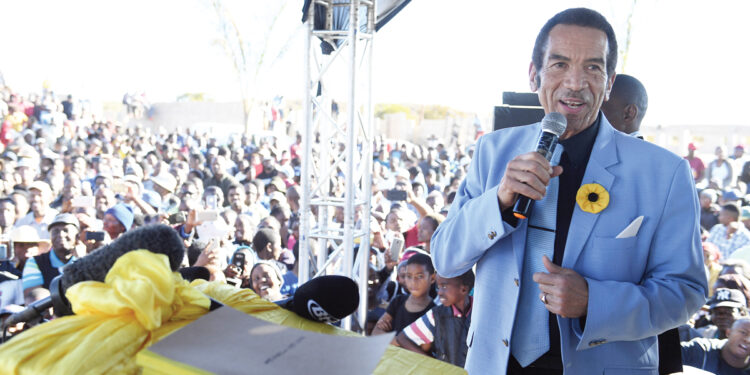 Some members want him out of central committee

Only BPF congress can drop him from NEC – Ookeditse

Former president and Botswana Patriotic Front (BPF) Patron Ian Khama is having the party members both at National Executive Committee (NEC) and the BPF Youth League levels pitted against each other.

Factions are said to be emerging on the party with members divided against Khama’s involvement on BPF central committee and some of his comrades want him to step aside as he influences decisions.

The Patriot on Sunday has learnt that at the center of the brewing storm in the ruling Botswana Democratic Party (BDP) splinter party is that members are divided over Khama attending NEC meetings.

Sources close to developments revealed that some of the NEC and BPF youth league members who were last week dropped from their positions are unhappy that Khama totally controls BPF.

“The Patron is not an elected member of central committee and he should be not be taking part in the central committee resolutions or decisions. The matter of president Butale wasn’t handled in a good manner because of the influence of Khama on some NEC members. This is not good for BPF at all. Khama should do his task as Patron outside the NEC,” said one worried key BPF convener.

In an interview on Friday, BPF Publicity Secretary Lawrence Ookeditse said that it is mischievous for some people to call that Khama be removed from the central committee as he is not elected.

“The party is run in proper manner and we will not allow people who are trying to sow seeds of discords to destabilize the party. Khama doesn’t control the central committee,” said Ookeditse.

Political analyst Lesole Machacha said that since Butale was suspended the party began to have issues.

He said BPF central committee is the one that elected Khama into it hence need to deal with him as well.

“There has never been noise in the BPF until when Butale issue surfaced. It seems that his issue has been the problem resulting into factional battles. The BPF NEC must exercise power if some feels that Khama is controlling. Factions will be always emerge when others party members feel that they are no longer supported and Butale’s fans could be unhappy with Khama,” said Machacha.

Rift erupted between past youth league structure members who were purged after the league was reconstituted last week by the NEC and some said were targeted as they are against Khama.

It is said that the majority of the purged youth league members together with some of the NEC members unconditionally supported the suspended BPF president Biggie Butale who is now left in cold.

Ookeditse indicated that the reconfiguration of the youth league is the decision of the BPF NEC.

According to him, the reconfigured youth league came into existence to serve on interim basis.

“There is no drama and conspiracies that we will be entertaining regarding the newly formed youth league. The party has been working on to reconfigure the league even before I joined BPF. Comrade Nthobela likes the party and he is willing to serve and him opposing in a statement the NEC decision doesn’t reflect that the party is in disarray. We love him as the party,” he said.

He stated that the new youth league is unlawful therefore wants the party to resolve the issues.

“We are hopeful that the party will respects the existing structure. We are not aware how the new members were brought about. There must be consultation by the leadership,” he added.

The BPF is said to have been rattled by instability when NEC decided to suspend Butale who is facing allegations of sexual misconduct against one party youth activist who complained to NEC.

Those who rally behind Butale are said to condemning some members of the central committee who are close to Khama for orchestrating the plan against Butale hence factions brewing in BPF.

Also, the recent reconstitution of BPF Youth League last week is said to be deepening factions.

Some of the removed members of the former youth league decried that they were targeted for standing in solidarity with Butale protesting that his suspension wasn’t done in a conducive way.

However, Ookeditse averred that the party NEC takes every decision following proper procedures.

BPF spokesperson also said that the party is still thinking on how to conduct the elective congress.

He said that due to the Covid-19 pandemic, there has been challenges to convene the congress.

“We had thought of virtual congress but the members have been not happy about the idea for number of issues that include manipulation of elections or so. We are very mindful of adhering to the government Covid-19 protocols and as opposition party it will be targeted if we can try to conduct the elective congress because the Masisi government hates  us very much as BPF,” he said.