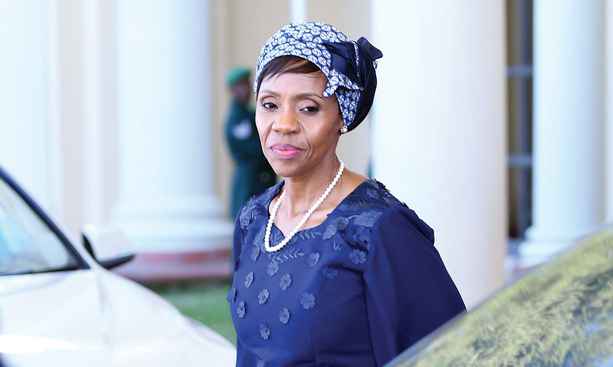 For the past 10 years Botswana has been without a first lady, but with President Mokgweetsi Masisi‘s ascension to the presidential seat, this void was filled by First Lady Neo Masisi.

Having spent the latter part of her life in the diaspora, the first lady was not known to most as she literally broke into local public circles months before her husband became president. This nonetheless didn’t stop her from hitting the ground running. Her eagerness to participate and take her place at the table has been largely evident.

If she is not traversing the world to attend high level regional and international meetings with her husband, Masisi is equally kept busy here where all sectors from the private, public and civil societies have embraced her presence and engaging her in different platforms.

But as explained by her husband to the media recently, the first lady does not have the remit to influence government policies. The role of Botswana’s First Ladies is largely ceremonial. The first lady has so far been engaged with The United Nations Population Fund (UNFPA), UNAIDS and the United Nations International Children’s Emergency Fund (UNICEF) since she is keen on issues that affect adolescents. She launched the UNICEF campaign against sexual exploitation and abuse under the title: “Eseng Mo Ngwaneng.” The campaign formed part of the National 16 Days of Activism Against Gender-Based Violence.

She has also officiated at numerous high level events where she pledged her support for women empowerment and gender parity.  Speaking recently at the De Beers W Summit, the first lady said; “It is important that as women we make personal pledges to make a contribution in providing solutions to these challenges – what is my contribution in my small corner?”

As mentioned the first lady role is largely ceremonial but recently the Minister of Presidential Affairs, Governance and Public Administration Nonofo Molefhi revealed that government is considering having a permanent office for the First Lady. The First lady does not have a salary and allowance and only relies on donations to carry out her charity and ceremonial activities.

The First lady is an accountant by profession and has spent all her career life working in the private sector both in Botswana and the diaspora. She cut her teeth in corporate sector at Debswana Diamond Company in 1994 after attaining her Chartered Institute of Management Accountants (CIMA) qualification. She would later  in 1999 join Barloworld Equipment- Botswana , and  in 2001 joined  Global Resorts  Botswana (Grand Palm)  and later Kalahari Breweries Limited  (KBL).

In 2004,  Masisi took a bold step; motivated by the  quest  for international exposure, she   took up a job at the United Nations Headquarters in New York, kick starting an over a decade career with the international body. After six years     she relocated to Addis Ababa Ethiopia to join the United Nations Economic Commission for Africa. She would later in 2013 accept an assignment with the Integrated Peace building Office in the Central African Republic in Bangui. She cites this as one of her life changing experiences. In 2015 she moved back to New York to be part of the Umoja team, responsible for deployment of an Enterprise Resource planning implementation project across the United Nations entities worldwide.

She has since taken a break from her international service to support her husband as the new president of Botswana. They are blessed with a thirteen year old daughter, Atsile.