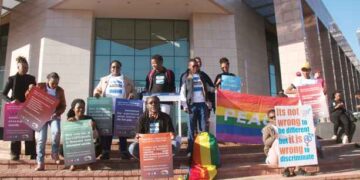 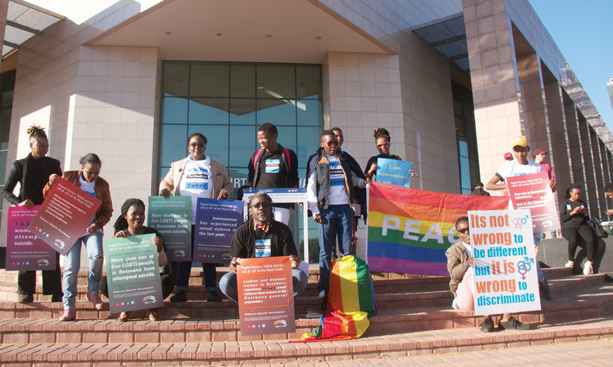 History was made in Botswana following a landmark High Court  ruling on Tuesday to strike down colonial-era laws by declaring unconstitutional parts of section 164, 165 and 167 of the penal code, which criminalise same-sex relationships.

Consequently, the high court ruling legalized of homosexuality resulting in diverse reactions from the local and international community on the decision. A panel of three high court judges led by Justice Michael Leburu, Abednego Tafa and Jennifer Dube delivered judgement in favour of Lesbian, Gay, Bisexual and Transgender (LGBT) community.

In the ruling, the court struck down section 164 (a) and (c) which criminalized consensual same sex sexual conduct and have removed “ private’’ from acts of gross indecency criminalized under section 167. Section 164 reads that “Any person who has carnal knowledge of any person against the order of nature” or “permits any other person to have carnal knowledge of him or her against the order of nature is guilty of an offence and is liable to imprisonment for a term not exceeding seven years”.

Section 165 of penal code notes that “Any person who attempts to commit any of the offences specified in section 164 is guilty of an offence and is liable to imprisonment for a term not exceeding five years”.

Controversial local pastor Reverend Thabo Mampane welcomed the ruling with warm hands saying it has been long overdue citing that God doesn’t discriminate any one. Speaking to this publication on the sidelines of court, Mampane indicated that he is fully aware that some of the religious leaders will condemn the high court decision as homosexuality is perceived as sin before God. “I am a supporter of the LGBT community, very proud for the court to have struck down the sections of the penal code that criminalized same sex relations. LEGABIBO’s victory belongs to all of us,” he charged.

Reverend Mampane is known of embroiling in a fight back in 2016 against the USA radical anti-gay Pastor Steven Anderson in live interview on Gabz fm. Anderson who was then deported immediately made the remarks that gays deserve to be killed pointing Mampane who rebuked his sentiments in favour of the LGBT as a fake pastor.

The attorney representing LEGABIBO on the matter Tshiamo Rantao said their submissions sought to repeal section 164 (a, c) and section 165 of the penal code that decriminalized same sex relations. Rantao who has turned out to be a hero for the multitudes of local gay community pondered that the two provisions were inhumane as it violated rights of the LEGABIBO members who were attached to the stigma from society. “The judges presented the ruling in a compelling manner which included elements of serious evident based research. This ruling moreover ensures that Botswana is making significant strides in human rights protection. To LEGABIBO members get it clear that the court ruling doesn’t mean that you can marry for now,’’ Rantao said.

Congratulatory messages also poured in towards LEGABIBO from some of the international human rights advocacy organisations such as Amnesty International and European Union amongst others.

He said section 164 and1 65 of the penal code proves to be ultra vires or opposite to section 3 and 15 respectively of the constitution which is the supreme governing law of the country.

Section 164 of the penal code according to Leburu promoted discrimination towards the LGBT community as it violated the fundamentals and freedoms rights of individuals as per section 3 of the constitution.

Section 15 of the constitution on the other hand emphasizes protection from discrimination on the grounds of sexual orientation, race, and religion just to mention few.

“State cannot be sheriff or regulator in of what goes on in people’s bedrooms. Sexual orientation is human and its’ not a question of fashion hence the question of morality should not be the concerns of the law, “Justice Leburu said delivering judgement.

The ruling on legalizing same-sex relations received condemnation from other members of the society who took to the social media their dissatisfaction on the matter. Decision to legalise homosexuality is perceived by some including religious leaders to have turned Botswana into Sodom and Gomorrah nation similar to the state attorney’s submissions while  arguing the matter.

The state attorney noted in submitting that legalizing of homosexuality is evil as evidenced on the bible book of Genesis chapter 19 which resembles a society that sponsors homosexuality similar to the cursed cities of Sodom and Gomorrah.

Sodom and Gomorrah are depicted as sinful cities which were encompassed of massive homosexual practices before God destroyed them with fire.

A 2013 study report by the Pew Research Center indicated that homosexuality is widely rejected in most countries in Africa, with Botswana being the latest to join few countries that have enshrined homosexuality. South Africa has embraced homosexuality for quite some time being legal since 1996, while Angola decriminalized homosexuality earlier in the year. Other countries remain anti-homosexual evidenced by the Anti-Homosexuality Act of 2014 which made homosexual to be punishable by life imprisonment.

UB supports a knowledge based economy 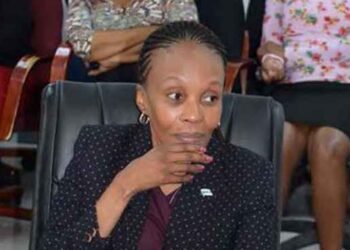 UB supports a knowledge based economy