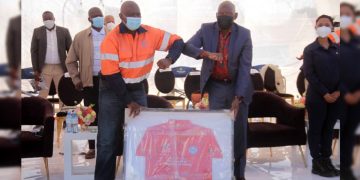 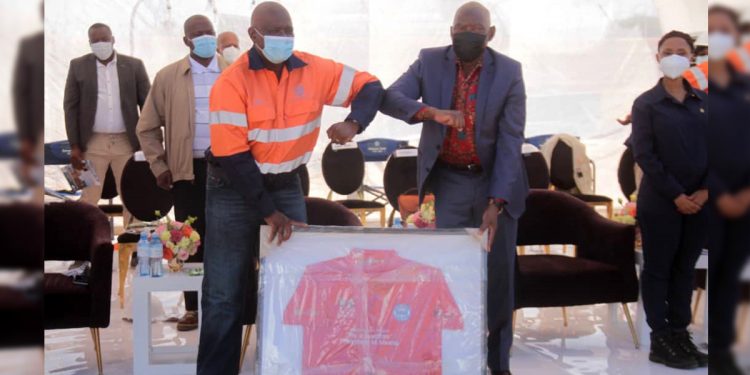 Khato Civils Executive Chairman, Simbi Phiri has dispelled a misconception that Africans are not capable of organising themselves well to execute technical projects.

Speaking at the launch of 100km Masama/Mmamashia project on Friday morning, Phiri said their success in executing the project on time and within budget was a testimony that Africans are capable.

“This is testimony that Africans can equally deliver on any project provided they have been given the necessary opportunity and support,” declared Phiri who couldn’t hide his jubilation.

He declared: “Today I am very, very happy. This proves that Batswana can do and deliver on projects like this one. We worked very hard day and night. We are grateful that when some doubted us Mr President, you gave us the opportunity to showcase what we can do. If many leaders in Africa could do what you have done to many black people, it would show that when an African is given an opportunity he can deliver”.

President Mokgweetsi Masisi commissioned the 100km long transmission pipeline that is transporting 64 mega litres of water daily from Masama wellfields to Mmamashia to address a daily shortfall of 49 million litres of water in Southern Botswana.

The project was delivered in record time and on budget as result of the excellent work of the contractor Khato Civils.

President Masisi praised Khato Civils and urged other companies to follow its example, castigating companies that often fail to deliver projects on time resulting in cost overruns and general inconvenience. “This is tantamount to corruption,” he warned.

President Masisi hailed the completion of this pipeline as a milestone in his government’s effort to reduce water shortage across the country and bring this country towards the realisation of Sustainable Development Goal 6 which calls for all nations to “Ensure availability and sustainable management of water and sanitation for all’.

He said access to water and sanitation is fundamental to uphold human dignity.

“The 100km Masama-Mmamashia pipeline was prioritized under the emergency projects following water shortages in Greater Gaborone. As you may be aware, the water shortage extended to the constituencies of Mochudi East, Mochudi West, Tlokweng, Moshupa-Manyana, Thamaga-Kumakwane, Ramotswa, Lobatse, Kanye, Mmathethe-Molapowabojang, Goodhope-Mabule, Mogoditshane-Mmopane and Lentsweletau-Mmopane,” Masisi said.

“And I am happy, that within time, budget, and at the right quality the project was completed, starting its deficit notification period for another 12 months until 7th September 2022, where the contractor is liable for any defects that might arise during the period,” he said

According to him, the Masama wellfields were identified as part of a strategic plan to optimise water security through conjunctive water supply scheme to meet the water demands for Greater Gaborone which caters for an estimated population of about 700, 000 people.

The project was awarded to Khato Civils, South Zambezi and Evolution Joint Venture at an amount of P781, 555, 356.89, though experts say projects of this magnitude usually cost in the region of P2 billion.  Such a project usually takes years to complete but Khato Civils completed it within 12 months.

“In this regard, I wish to commend Khato Civils/South Zambezi/Evolution Joint Venture for doing a sterling job. I am informed that more than 700 hundred Batswana both skilled and unskilled were employed during the construction of this project,” Masisi said.

Phiri reminded the audience of the resistance that his company faced to start its operations in Botswana despite having local roots as his mother was from Tonota and that he had worked in Gaborone in the 1980s.

“In this project we were not looking for profit but implementation,” Phiri said, adding that local suppliers also cashed in from the project during difficult times of COVID-19. Among other speakers were deputy paramount chief of Bakgatla Bana Sekai Linchwe, Minister of land Management, Water and Sanitation Services Kefentse Mzwinila and Mochudi East Member of Parliament Mabuse Pule. After the official commissioning of the project, the dignitaries toured the pipeline termination point and related infrastructure projects.