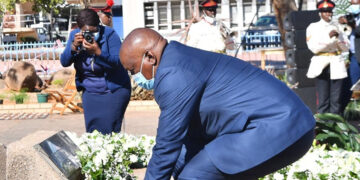 MASISI ON THE COMMEMORATION OF SIR SERETSE KHAMA CENTENARY

MASISI ON THE COMMEMORATION OF SIR SERETSE KHAMA CENTENARY 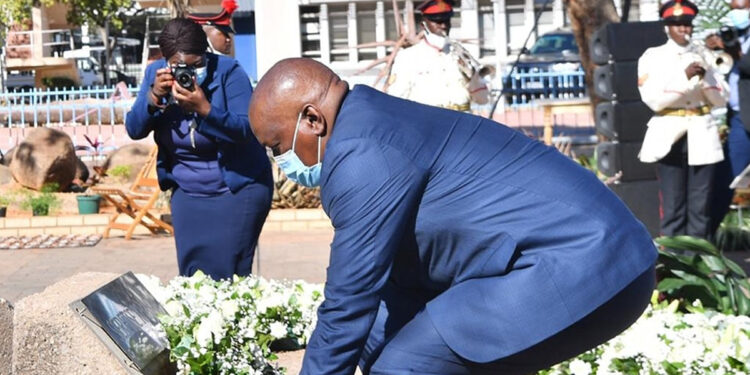 Bagaetsho, Botswana’s success story could not have been a mere ‘sheer luck’, as it may have been believed. Our history is awash with extraordinary men and women of great minds who willed to charter unchartered territories.

Men and women who were more than prepared to     make  sacrifices  for  Botswana.  These  were patriotic citizens who yearned to stand for progress, at the time when the future of this country looked bleak. They were people dedicated to transform Botswana from a dismissed client state to an independent country with a constructive and meaningful role to play in world affairs.

We will forever remain indebted to these great sons and daughters of Botswana who placed a great destiny in our hands, and whose shoes we can only envy to fit.

I am grateful that today we are celebrating the Centenary of a remarkable, outstanding man, who was also the founding father and the first President of the Republic of Botswana – Sir Seretse Khama.

Distinguished   Ladies   and   Gentlemen,   Sir Seretse  Goitsebeng  Maphiri  Khama,  born  in 1921 in Serowe, remains one of Africa’s greatest icons, a Pan Africanist in his own right, and a man  of  his  word.  Ga  a  ise  a  ke  a  nne, ‘Motlhanka wa Mafoko a gagwe’ – in other words he never was, ‘a servant of his own words’. He took concrete steps to actualize the ideals he professed. On this note, allow me to express my profound gratitude to the people of Serowe, for lending Botswana such a legend and a visionary statesman who made a formidable contribution to the success that Botswana is today and to the development of Africa, especially Southern Africa.

Seretse, as his name suggests, ‘the clay that binds     together’,  was  an  embodiment  of democracy, unity, non-racism and development. He was a constitutional republican and a democrat who pioneered inclusive politics, and who out rightly rejected one party state system and monarchical rule. This was because he also detested absolutism, abuse of power and greed by anyone, and was especially against the involvement of Dikgosi in politics.

T h e  f o u r  c e l e b r a t e d  n a t i o n a l  v a l u e s  o f Democracy, Development, Self- Reliance and Unity, which our first President championed with vigour  and  tenacity,  have  carried  us  through good and bad seasons. These are the values premised  on  our  Setswana  culture  that  have d e l i v e r e d  t h e  s o u n d  s o c i o – e c o n o m i c development, political stability, peace and unity that Botswana is known for globally. Sir Seretse Khama envisioned a society where all men and women across racial and tribal divides worked in unison, unhindered by artificial and irrational divisions which undermined self- realisation.

Neither were the issues of youth development and women’s empowerment alien to Seretse Khama and his compatriots. As Government continues to vigorously pursue the involvement of youth and women, as well as, the private sector engagement in the development agenda of Botswana, we are reminded that this perspective to development was conceived long before the country became a Constitutional Republic. For he had long stated that, as I quote, ‘you do not achieve development by forcing people in directions they do not want to go, for reasons they do not understand’.  He therefore, believed in the will power of the people and was the proponent of our Consultative process, which as the President of this country, I too, hold in the highest regard.

Dist inguished  Guest s,  Ladies  and Gentlemen,    a l b e i t  i n h e r i t i n g  a  w e a k , impoverished land-locked state, with no revenue and heavily dependent on financial and food aid, our circumstances did not obstruct Sir Seretse Khama’s vision for a prosperous Botswana. He rightly believed that our prosperity could only be achieved through the sound administrative and management of the scanty resources – and a continued  people-centered  approach  to development.  This was not just an ideal, but for him, a determinant for success and true national prosperity.

It  will  be  recalled  that  my  father,  who  would have turned 100 years on 14th March 2021, served in Sir Seretse Khama’s Cabinet for a long time in different capacities. Together, with their compatriots, they built this country literally from scratch, brick by brick.   May their souls rest in eternal peace. The  relative  wealth  that  was  created  from m i n e r a l  r e v e n u e s ,  e s p e c i a l l y  j u s t  a f t e r independence, made Botswana the fastest growing economy in the world from the 70s until his departure from our side in 1980.

In  this  regard,  we  pride  ourselves  today, because we are continuing his legacy which has seen  us  pursue  investments  in  infrastructural and  social  development,  which  enhanced  the introduction  of  universal  health  care  coverage and education system, among others.

Ladies  and  Gentlemen,  Sir  Seretse  Khama also believed in Botswana’s potential as a model of democracy and development for Southern Africa. And, he was not ashamed to share his vision about Botswana with other statesmen.

“we ourselves in Bechuanaland, should try to formulate a policy of our own, unique to us. And that is a policy of teaching those countries who profess to be more advanced than   our selves ,  that in as far as administration and race relationships were concerned, they have more to learn from us than we from them’’. And that,

‘We should not bother very much with what anyone might say. We have ample opportunity in this country to teach people how human beings can live together.”

It was because of these democratic inclinations, that  Botswana  from  the  very  beginning  was e s t a b l i s h e d  a s  a  m u l t i p a r t y  s t a t e .  H i s progressive views were not only limited to Botswana. The application of the values of democracy, unity, development and racial equality were, for him, as for many of us, also necessary across Africa. He was therefore, unyielding in Africa’s liberation struggle of the 1960s as he became one of the founders of the Front Line States – committed to the political freedom of Southern Africa.

Among his major achievements was his role in the formation of the African National Congress’ external wing, Umkhonto we Sizwe in the 60’s. Leveraging on his status as the defacto Kgosi of Gammangwato,  he  held  secret  meetings  with the likes of Nelson Mandela and Oliver Tambo here in Botswana. Essentially, Botswana became a safe  haven  for  freedom  fighters  from neighbouring  countries  which  were  ruled  by racist minority regimes.

Seretse’s  actions  were  representation  of  his brave and courageous character, because at the time, Botswana was dismissed as a poor and defenseless country, with no alternative, but to sell  out  the  liberation  struggle  to  the  white

23. Though  he  passed  the  earth  at  a  relatively young age, he left this world an accomplished and content man. He attended the independence of the Republic of Zimbabwe in March 1980, which was later followed by other countries on the  basis  of  his  solid  foundation  and  that  of other great leaders, such as, the late Dr Kenneth Kaunda of Zambia and Julius Nyerere of Tanzania.

25. Bagaetsho, Sir Seretse Khama did his part. A

lot  has  changed  since  his  departure,  and  we

have a lot of work to do in the face of the contemporary challenges which we continue to face.

26. My Reset Vision, which I recently announced will address these challenges and will play a key role in transforming Botswana’s economy and eradicating poverty, with digitization at the centre of our developmental agenda.

27. Fellow citizens, before I conclude my remarks, let me recognize the presence of Mr. Daniel Kwelagobe at this occasion, who also served in the Cabinet of the late Sir Seretse Khama.

28. Let me also remind you, as usual, to continue observing the health protocols of wearing masks properly, social distancing and washing hands frequently to prevent the spread of COVID-19. I have taken my first jab of the vaccine. Please,