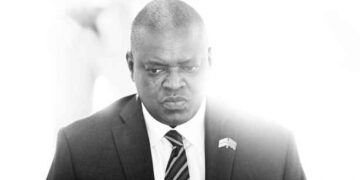 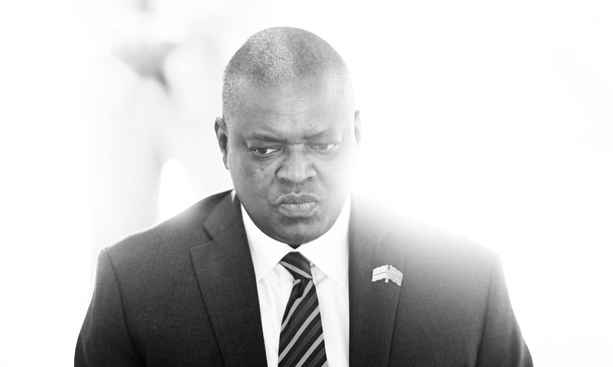 The pensive posture adopted by President Mokgweetsi Masisi when confronted with questions about political and security issues in his administration, aptly capture the gravity of problems the BDP leader has to grapple with as the October general elections draw closer.

By the look of things the man is sandwiched between a rock and a hardplace. He is living on borrowed times. To tap into his core and evoke an emotionally charged response, all one needs is to ask if recent security  threats do not distract him from leading the country or to just reflect on his presidency thus far. And so that was the case on Thursday, when Masisi was briefing the media on the outcomes of his two day visit to Kenya early in the week. Zooming into Masisi’s facial contortions, as he repeatedly pauses to reflect on the sharpness of his measured response   to such a simple inquiry reveals a troubled man, a man walking a tight rope

Then he reluctanctly and ever so labouriously hazards a response:”You gotta deal with what you gotta deal with. Development is a process, it doesn’t stop. And so when things emerge that were not there (before you came in) you gotta respond in a manner to try and stabilise and respond in a manner as calm as possible. I am not a security expert…I am not responsible for my own security…I take orders too (sometimes irritating) …”

Then, he digs in telling journalists that they are very priviledged to investigate and analyse developments in his presidency better. Masisi even suggests, unconvincingly so, that the heavily under-resourced newshounds probably hear and see more than he does. He postulates that as Botswana evolves and “we get into this… the environment and landscape is different. If you haven’t seen that wake up!” he jolts the scribes out of suspected slumber.

Then finally Masisi talked about his presidency. He defines it thus; “Intriguing, interesting and exciting because you are not sure what else is going to come your way in ways that would have been more assured of or predictable in the past. In this time and space you cannot be precise in your estimation about what will happen like any of my predecessors would have been able to estimate, it has never been like that under any president before me. I am not sure which parties are going to be in alliance tomorrow. You never know who will fall in love with who in the political space the next day. It has never been like that, never happened. Its intriguing because you just need to roll back time and digest issues, what is it that compels people to act, think in a particular manner.There are a number of common denominators. What now binds which wasn’t binding before, and in that juxtaposition place me. What role am I playing? Its interesting. Its exciting. They can do as they please”.

“I am more than willing to continue to avail myself to say this is what I will do. I am more than prepared to put myself up to the test of popularity. If you do not like me you did not like me. I feel very priveledged in many ways. I did not expect to be VP or President, but I cannot say no about it, it is too late now”.

“I believe I have something to offer.I am prepared to do the hard work, the bidding. Im focussed. I am willing to do my best without being distracted by anything, including even the recent security threats (including abandoning trip to Mozambique mid-air and the emergency crash landing at Fracistown airport)”.

“I never would have had the experience like this if I was not doing what I am doing. It had to be done. Botswana is evolving, metarpmophing, new expectations, new cohorts, new opportunites, new challenges and we have to keep up pace. We cannot respond the same way because if we do we will become irrelevant,” he said.

Masisi told journalists that Kenya has very strong valid reasons for differing with Botswana on the elephants management issue. He revealed that Botswana has convinced the Kenyans  that the position they wanted to adopt was never going to work because CITES was not set up to do what they are attempting to do with it. “As fellow pan Africanists we resolved to hurdle in our differences. We have agreed not to allow Non State Actors to come betwen us, to divide us. We have a resource, they need it,” he said.

Masisi said the two countries have given their ministers of tourism and defence the go-ahead to continue negotiations for a win-win solution. Therefore, at CITES there will not be any fight despite the differences between the two, he said. He also promised to lobby other heads of state in the CASA region, ahead of a meeting with Namibian President Hage Geingob -who officially opened the 2019 Ghanzi Agricultural show on Saturday- to continue discussions of the elephants issue.    `

Minister of Transport and Communications, Dorcus Makgato, said the two countries have signed a Bilateral Air Services Agreement to improve relations in the air space, which is a tool that will help Air Botswana and Kenya Airways to negotiate deals.

She said to further strengthen the bilateral cooperation in aviation, Kenya Airways have themselves already committed that they will soon resume direct flights to Gaborone after the service was terminated in November 2016. Transport ministers have agreed that the resumption of the services in two years. “We already have trade relations with the Kenyans, e.g Kenya Airways. They have similar equipment to newly acquired jets by Air Botswana,” Makgato said.

Makgato said the facilitation of the Kenya Airways deal was motivated by a recent announcement by Qatar Airways that they will soon start direct flights to Gaborone, following a visit by President Masisi to the State of Qatar.

Makgato said one of the Momerandum of Understanding (MoU) that Botswana signed with Kenya was in information and communications technology (ICT) to facilitate the much talked about transformation from a resource based economy to a knowledge based economy.

“At the heart of such transformation is digitalisation, its ICT which will form the bedrock of how to run government, and manage the economy. Kenya is already advanced in e-government, therefore they will provide an ideal state to benchmark on as Botswana migrates to new technologies and fine tune strategies,” she said.

Masisi won the haerts of journalists when he revealed that his government is working on repealing the controversial Media Practitioners Act in the current session of Parliament to pave the way for self regulation. “We will scrap it and have self regulation in its place,” he said to chers from the newshounds.

Masisi was in Kenya for a two day state visit at the invitation of Uhuru Kenyatta, President of the Republic of Kenya. During the visit, Masisi and Kenyatta held bilateral talks with a view to further deepen and expand bilateral cooperation in various areas of development, including agriculture, trade and investment, tourism, defence and security, health, mining and education.