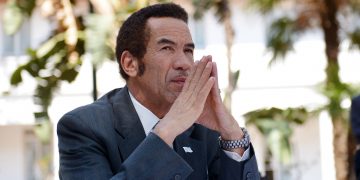 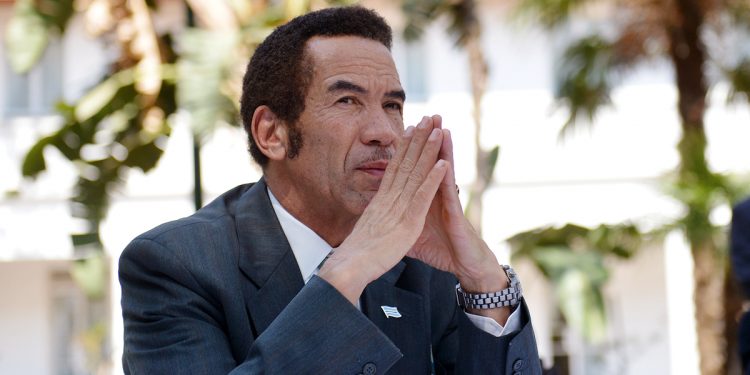 Former President Ian Khama says he remains unshaken, following a hectic week of raids on his properties and those of his close associates by an uncompromising  Directorate of Intelligence and Security Services (DIS) operatives.

He insists that he will not skip the country to seek asylum and find safety elsewhere in the world.

Political tension continued on Friday when Bangwato elders convened a meeting in Serowe to establish the main cause behind the conflict between Khama and President Mokgweetsi Masisi. Ian Khama, son of Botswana’s first President Sir Seretse Khama, is the paramount chief of Bangwato tribe.

The Friday meeting was preceded by a Botswana Patriotic Front (BPF) rally in Serowe on Thursday where the party urged government to stop harassment of its patron -Khama.

In an interview on Thursday, Khama said the raids by the DIS on his properties over claims that he is in possession of military weapons alongside ex- DIS boss Isaac Kgosi is a big joke of the year by government. He said there is no doubt that his life is in danger and DIS agents want him in custody.

“That is also why they have failed for six months to respond to the United Nations about such allegations of threats to my life. The DIS Director General, Peter Magosi falsely accused me in order to discredit, arrest and imprison me about fake stealing of P100 billion,” Khama said, fighting back.

Quizzed further if he has any intentions to leave the county to seek an asylum owing to the DIS raids, Khama said he believes that is what the Masisi administration want him to do to today. He said government via the DIS want him out of the way and will resort to anything to achieve their plan.

Moreover, Khama who is Botswana Patriotic Front (BPF) patron said he is aware that his other associates, not only Kgosi, are being targeted but not necessarily with the raids. He noted that Botswana’s democracy under the tenure of President Mokgweetsi Masisi is in a serious decline and in other countries has led to unrests, saying the peace and stability that Batswana have enjoyed for many years will be popped like a balloon pricked by a pin if the state agencies such as DIS witch-hunt citizens.

Efforts to contact DIS Director General Peter Magosi proved futile as his mobile phone was off.

Political and Administrative Studies lecturer at University of Botswana Dr Adam Mfundisi, said since the end of the 2019 general elections, the BDP and its president Dr Masisi has launched an elaborate strategy to assault the integrity of the former president and that his close associates.

Mfundisi who is Public Policy Analyst said anyone who links himself or herself with SKI was demonized. “State resources, institutions, processes, and operatives were mobilized to attack and demean the character of SKI. Serious allegations have been directly and indirectly levelled against SKI and his close associates including the former Spy Supreme Isaac Kgosi. The UDC during the last elections became a victim of a vicious and vitriolic propaganda perpetuated by the CAVA BDP brigade. It was linked to SKI and that UDC wants SKI to come back to power. Allegations of SKI destabilizing the MEK regime were propagated with limited tacit information to back these. SKI and associates were also accused of mobilizing internal and external insurrections,” said Mfundisi.

In addition, the veteran UB don indicated that there were also the allegations of embezzlement of funds plus the money laundering against Khama but nothing concrete was advanced. He opined that BDP from its inception has long history of weaponising the security establishment to target the political adversaries, the political motivated abuse of power is outrageous and immoral.

“It turns the country into a ‘Banana Republic’, a political description that is not reflective of the Botswana people.  These actions of the State are worsening the general polarization of society. It does not augur well for the country and may lead to political instability if not checked and corrected,” he said.

Botswana, he said, more than ever needs strategic leadership to promote national dialogue and unity of purpose. Moreover, Mfundisi explained that if there were serious misdemeanors that happened during SKI – MEK administration, a comprehensive investigation and prosecution must be carried out, buttressing selective justice is an affront to the Rule of Law.

Founding DIS Director General Kgosi had a difficult week as he spent three nights behind bars. Kgosi has been arrested by the security agents and was hauled before Village Magistrate Court where he slapped six charges which include possession of three armoured vests, possession of forged documents such as passport and possession of military uniform just to mention but few.

During the heated altercation with security agents, Kgosi blasted state for harassing him.

Mfundisi said Kgosi was detained at the Sir Seretse Khama International Airport in what was described in the media as Hollywood Style operation and was brought before the court but the case frizzled out later.

“Now another drama unfolded in which the former DISS supreme was arrested and charged with possession of armored vests, possession of bullets, forged documents, etc. which to me are a definition of politically motivated investigations and prosecutions. Information from Kgosi is that his houses were searched contrary to due process. No search warrant was issued, and no charges were presented to him before his arrest and incarceration. He was not also afforded the chance to consult his lawyers and family,” said Mfundisi responding to the Kgosi’ prosecution.

According to him, the Constitution of Botswana protects the rights and freedoms of the individual.

“What the Police and DISS did was to defeat Kgosi’s presumption of innocence, thereby going against constitutional safeguards. The Rule of Law should be complied with irrespective of the person under investigation and prosecution. Using criminal investigations and prosecutions to achieve political interests is repugnant and criminal. The DISS and the Police must be insulated from politics,” he said.

Makgoro gave Kgosi bail on conditions that he doesn’t interfere with the state investigations.