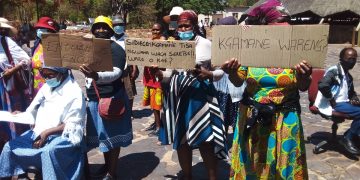 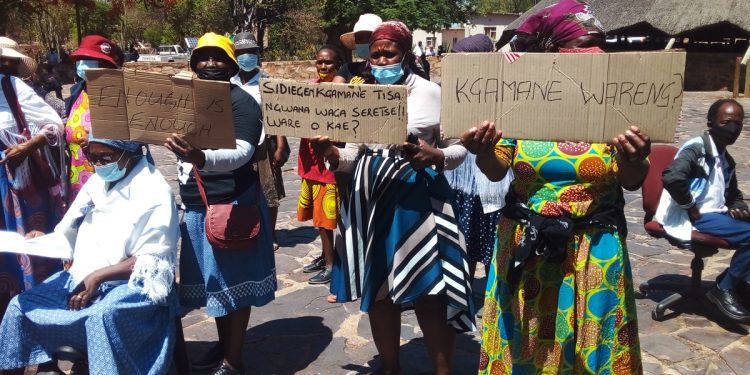 Accuse him of dining with Masisi while Khama suffers

A week after Bangwato paramount chief, Kgosikgolo Ian Khama sneaked out of the country into neighbouring South Africa, his tribe is up in arms demanding his return and that state security agents be ordered to stop pursuing and harassing him.

Tempers flared on Friday morning at a hastily convened meeting at Serowe main kgotla, where speakers took turns to spew fire at the recent developments around their Kgosikgolo. Defiant Serowe residents convened at the main kgotla to petition Bangwato regent Kgosi Sediegeng Kgamane in relation to Khama’s situation and his whereabouts. Kgotla protocols were disregarded, leaving many in attendance surprised and confused because of the obvious absence of Bogosi representatives to welcome the tribe and direct proceedings. Such is the standard conduct of all meetings held at the kgotla.

Hellbent on continuing with the meeting, some in attendance who were clearly ring leaders, convinced the crowd that it was okay to continue with the meeting without bogosi. Kgotla protocols were thus thrown out the window and the meeting continued, anyhow. “Proper channels were not followed in convening this meeting, and this kgotla has its leaders. We don’t know whether they know about this meeting or not, therefore let’s reschedule and go back to follow proper procedures,” said a worried tribesman, trying to speak sense into the crowd.

But such wise counsel fell on deaf ears. “We know why these people (dikgosi) are hiding in their offices and have not come here to welcome us. They are under Eric Molale, and Molale is President Mokgweetsi Masisi’s bootlicker,” retorted another tribesman.

A Khama loyalist, Emmanuel Orateng clearly in defiance, told the crowd that Bangwato do not need permission from anyone to assemble at their kgotla. “When Bangwato want to discuss issues that affect them, they go to the kgotla. This kgotla belongs to Bangwato, we discuss our issues here, if people are said to be defending their jobs as you said, let them stay in their offices. If they stay mum while our paramount chief is harassed and expect us to stay away, that is not going to happen. If there is anyone who feel that they can not be part of this meeting they can also go. They are not doing anything wrong, those remaining will continue with the meeting,” roared Orateng, to a round of applause from those in agreement.

In an attempt to clear the confusion, Councilor for Serowe South Atamelang Thaga explained that the kgotla meeting was convened by members of tribe who feel that Bogosi (Borangwanaagwe Kgosikgolo -uncles to the paramount chief Ian Khama) are dragging their feet to engage President Mokgweetsi Masisi to resolve the protracted battles with Khama. “The people have decided to take the reins from the kgotla leadership because of their reluctance to address Kgosikgolo’s situation,” said Thaga.

Another Councillor for Tshimoyapula- Majwanaadipitse, Katholo Tapologo criticised the current Bangwato bogosi leadership, saying they are celebrating with President Mokgweetsi Masisi while he continues to persecute Khama. He said when Khama ascended the paramount chief of Bangwato, his father warned him about whom to trust between the tribe and his uncles. “He warned Khama not to trust his uncles, but rather the tribe (O reile Kgosikgolo ya rona are o seka wa ikanya borangwanaago, o ikanye morahe’). Today Seretse Khama’s words have come to pass. Where are the uncles now? The people are right here fighting for their leader,” cried out Tapologo, saying Khama’s uncle’s loyalty lies with Masisi as he pays their salaries their bills.

Tapologo said his loyalty lies with Khama and not Masisi or his government and he is going to continue to demand an explanation regarding the wellbeing of the former President. “I am Khama’s servant (lelata) and Councilor for Tshimoyapula-Majwanaadipitse. Masisi did not elect me. I was elected by the people of Tshimoyapila-Majwanaadipitse. I am here to demand answers on their behalf,” he said.

A local preist, Bishop Cynthia Mathadisa said she came to the kgotla meeting because they are worried about Khama. “We came here to look Kgosi Sediegeng Kgamane in the eye and demand he tell us the whereabouts of our paramout chief. I am a former teacher and I know how these things work with government, but Kgamane should have found a way to address us without compromising his position,” she said.

“We want to know where Khama is because we have had incidents where when people are finally found dead. We don’t want that. At this point we expect that Sediegeng should be worried about Khama’s whereabouts but he is just taking it easy,” she warned.

At the end of the tense Friday meeting, the crowd put together a petition directed at Bangwato regent Kgosi Sediegeng Kgamane, giving him seven (7) days to act on their demands.

The petition, read by former trade unionist Chimbidzani Chimidza, reads: “We the people of Gammangwato demand an explanation as to the situation pertaining to our paramount chief. We have observed that our paramount chief has been under attack since 2018 and you have never found it necessary to call us to his kgotla to brief us and seek our views on this important matter. Or is it that you find this issue not important to you. Let us remind you of the injustices done to our paramount chief, our paramount chief has been subjected to ridicule, intimidation and persecution for years. He has been stripped of his benefits as a former president, he has had allegations after allegations hauled at him time and again. Attempts have been made on his life and has been made more than once, and now he has disappeared and we are more than worried about his wellbeing.

Your silence speaks volumes. May we hasten to remind you that this chieftainship belongs to him (Khama) and you seem relaxed when he is being attacked from all angles. Are you waiting for something to happen before you call us? Who do you owe allegiance to? When do you intend to call us about this matters of life and death? We are disappointed by the silence of the chief’s uncles. We humbly request you to answer our concerns. We want you to tell us why you have been quiet for so long whilst our paramount chief is under attack. This silence is shocking and we didn’t expect it”.

Last Sunday, just hours before Directorate of Intelligence and Security Services (DIS) agents pounced Khama to effect an arrest for neglecting and/ or ignoring an order to hand in state assets in his possession, the former president ‘escaped’ to South Africa in what has been described by his close associates as a ‘private visit’. In an interview this week, Chief Executive Officer of the SKI Foundation, Mogomotsi Kaboeamodimo insisted that Khama did not flee to SA in exile. Ever confidently, he said Khama will return home soon.

Asked if Khama still considers Botswana safe, in view of his latest standoff with government and the DIS, Kaboeamodimo said the country has changed. “It is a disturbing prospect that Botswana known for its long tradition of peace and tranquility may not be safe for its own citizens anymore.  The unprecedented persecution and harassment of the eminent persons for the just apparent political objectives is harming not just the domestic environment in the country but also its international reputation,” said the outspoken Kaboeamodimo.

Kaboeamodimo accused the Masisi administration of fabricating another case against Khama, saying it is shocking that the former president is alleged to be in possession of arms of war and ammunition. According to Kaboeamodimo, such developments are characteristics of a nervous Masisi regime as it is caught up in its own mischief where it flouts the rule of law by intruding into the privacy and the liberties of citizens.

“It is already public knowledge that the Masisi regime is in the habit of fabricating dangerous falsehoods against Khama such as the P100 billion fiasco. As for the weapons of war accusation – how naive do they think Batswana are to believe that one man could ever have the required quantity to topple a government against a whole army that the BDF is with its military might, combined with the Police and the DIS to easily overwhelm any such attempt,” fumed Kaboeamodimo.

According to Kaboeamodimo, Khama is on a private visit to South Africa for a series of meetings with family and friends, but would not disclose further details. He said the fact cannot be ignored that Khama’s travel to South Africa came in the backdrop of a heightened persecution and harassment by Masisi’s government.

“Such persecution includes several infringements on the liberties and constitutional entitlements of the former President. It has been going on since Khama handed over power to Masisi. It should be noted that this is what caused the fallout between Masisi and Khama – the persistent political persecution and fabricated accusations of many things that Masisi launched against Khama after assuming power. Khama has made himself available to all efforts that came to his attention in trying to broker peace and possible reconciliation between him and Masisi,” said Kaboeamodimo.

Regrettably, Kaboeamodimo said it is Masisi who has publicly declared that he will not sit with Khama to attempt to iron out their differences, buttressing further that for the sake of of the country the stand-off has to be resolved sooner rather than later. But it cannot happen without Masisi participating.

Khama’s disapearance to South Africa is a sequel to and bears similar characteristics to the June 2010 dramatic escape into the same country by Bakgatla paramount chief, Kgosikgolo Kgafela II. The latter was also fleeing security agents just before he was arrested and jailed for contempt of court. Shortly before then, the then Regional Magistrate Lot Moroka had issued a warrant of arrest for Kgafela II and his brother Mmusi -the current Minister if Investment, Trade and Industry (MITI), after the duo failed to appear in court. They, together with 13 other accused persons from the Madibelankwe regiment, were facing numerous charges relating to unlawful flogging of members of the public in Kgatleng district.

Ironically, Khama -who had draped Kgafela II in a leopard skin during his September 2008 coronation as Bakgatla king, was the President of Botswana at the time. The Khama administration had fallen out with Kgafela II who openly trashed Botswana’s constitution, demanded a constitutional review and criticising the Khama regime. Kgafela II even defied government by refusing to attend and/ or become a member of Ntlo ya Dikgosi, insisting that he was not a civil servant and would not submit to the authority of District Commissioners-the most senior public officer in a district. Consequently, the Khama administration de-recognised Kgafela II and by extension Botswana government stopped recognising him as a Kgosi.

Kgafela II remains in Moruleng, South Africa to date despite numerous promises by President Mokgweetsi Masisi to facilitate his return. Khama is also believed to be still holed up in South Africa.