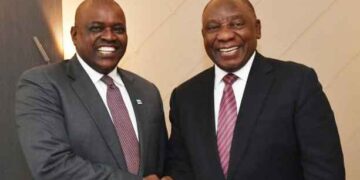 The Cold War Masisi has launched against Ramaphosa

The Cold War Masisi has launched against Ramaphosa 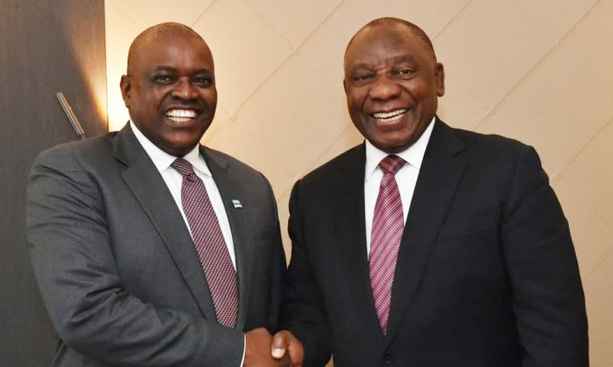 Probably against all expectations here and elsewhere, His Excellency the President Dr M.E.K. Masisi has launched Cold War of some sort against his counterpart the President of South Africa Mr Cyril Matamela Ramaphosa. This Cold War, I must add, could on one hand make or break President Masisi’s legacy and by extension, the political and socio-economic trajectory of this Republic. On the other, it could very well define President Ramaphosa’s legacy by how he responds to it. There’s a lot at stake for both of them and their countries. With Botswana heavily dependent on South Africa economically, one would have expected demonstrable camaraderie between the two of them more frequently given the history behind their countries. But sadly, if I may say so, the camaraderie interaction is few and far between. Instead, President Masisi has interacted more frequently with Presidents Hage Geingob of Namibia and Emmerson Mnangagwa of Zimbabwe respectively. Nothing wrong with this.

Yet economically and as things stand, nothing substantial with respect, accrues to Botswana from these countries. With this startling reality, the President is nevertheless pursuing the Cold War on the regional powerhouse neighbour not so as an economic agenda but more on the political side. The dictionary describes Cold War as ‘hostility between areas, States or nations without physical fighting’.

The Cold War’s roots are located in Botswana but would later be transferred to South Africa where the vicious fighting in earnest has begun. If it is won in that country, it will be a foregone conclusion that it will be won here with such precision and aplomb. The target in Botswana is mainly former President General Ian Khama while in South Africa is President’s Ramaphosa’s sister in law Bridget Motsepe-Radebe. On the surface, it appears the Cold War is all about following the P100 billion but underneath, there is more to it.

The War was ‘conceptualised’ immediately after Gen Khama left office with President Masisi receiving the presidential baton from him. Against expectations, the two political confidantes fell out against each other to date. Nothing suggests for now that the fallout could be redeemed anytime soon. There was further fallout following Mme Pelonomi Venson-Moitoi’s intention to challenge President Masisi for the Botswana Democratic Party (BDP) presidency at the Kang congress; her dropping from cabinet; allegations that Mme Bridgette Motsepe-Radebe was sponsoring Mme Venson-Moitoi to dethrone the President through some coup of some sort. Then came the bombshell of the Cold War; that Botswana government is in cahoots with AfriForum through Advocate Gerrie Nel to pursue the P100 billion in South Africa and in the process, manifest the Cold War.

Ordinarily, the President wouldn’t have thought about engaging an Afrikaner lobby group to fight his wars in South Africa given the long standing and acrimonious history of the Afrikaners and the black people in South Africa. This history, notwithstanding the reconciliation efforts by the founding President of the democratic South Africa Rre Nelson Mandela, still obtains. So for all intents and purposes and given the many sacrifices by many Batswana personally and collectively and the hardships perpetuated and achieved by the Afrikaners thereto, one would have thought it wouldn’t have crossed the President’s mind let alone seeking and obtaining the services of an Afrikaner-aligned law firm. But here we are. It has happened. So why would the President take such a bold and brave step to engage an Afrikaner lobby group given that this decision could evoke so much reaction among the many Black people here, in South Africa and elsewhere who view AfriForum as a white group still entrenched in the apartheid doctrine albeit cosmetically? The Afrikaners perpetuated a system of apartheid which dehumanised black people with everything under the sun. The UN would later declare apartheid a crime against humanity.

Given the broken down relationship between the President and his predecessor, the latter would have been arrested if the President had acted like some of his colleagues on the continent given the alleged massive corruption to have occurred under his administration. The P100 billion is the case in point. The former President himself expressed the fear of his imminent arrest post the elections. That not being the case, the President is still looking for culpability at whatever cost to this money and the wish is that the investigations will point at one direction – Former President, the Butterfly and Isaac Kgosi. With the investigations hoped to conclusively point at these individuals, they will be arraigned and hopefully convicted to serve jail time. The President does not want to look vindictive by taking unorthodox decisions out of the legal frame wok to nail the former President and his local allies. That’s one side of the story.

The second side is that the President is launching the Cold War on President Ramaphosa and by extension the ruling African National Congress (ANC).  The thinking could be that because of family relations between President Ramaphosa and Motsepe-Radebe, there could be a deliberate effort to stall the investigations. It has been suggested that by virtue of her political and business connections, she may have influenced every possible structure that could investigate her involvement if any in the investigations on the P100 billion – banks and the National Prosecuting Authority. Therefore, the only structure that could take Motsepe-Radebe head-on in the circumstances is AfriForum’s Gerrie Nel whatever the political and economic consequences could be. The enlisting of AfriForum by the President has received mixed reactions from across the legal and political formations here and in South Africa.

By and large, it is suggested it could backfire in the sense that fraternal relationships between the BDP and the ANC could deteriorate. Namibia and Zimbabwe, whom the President has warmed up over South Africa as indicated above, are unlikely to support the President on the AfriForum connection because their countries have suffered from the same white supremacists. So by launching the Cold War on President Ramaphosa, the President could be left vulnerable and isolated in the region given Namibia and Zimbabwe economic dependence on his country. The recent petrol crisis in Botswana has demonstrated beyond any reasonable doubt the country’s overdependence on South Africa. Notwithstanding the official reasons for the petrol crisis, the country was almost in economic ICU accompanied by massive economic downturn.

So what am I saying? That the President’s Cold War on President Ramaphosa in the manner and style he is pursuing is more than likely to backfire economically, diplomatically and politically. Botswana does not command regional influence for now with which to use such influence to pressure and isolate South Africa for whatever reason. It is hard to find whether SADC could be persuaded by Botswana to exert pressure on President Ramaphosa to speed up the Mutual Legal Assistance. Countries like Namibia and Zimbabwe with which the President has warmed up to since he assumed office, themselves are dependent on South Africa economically. Diplomatic relations with South Africa have for time immemorial, been excellent and Botswana cannot afford to polarise them. Politically, the BDP and ANC have been fraternal friends for so long and this friendship has worked well for the benefit of the peoples of both countries. It will not be in the interests of either county for them to be polarised politically.

In the end, the Cold War on President Ramaphosa principally manifested as soon as AfriForum came into the picture. While the P 100 billion is the big fish, nailing Gen Khama and his allies will also be bigger and fulfilling. In the end and someone said, ‘history will judge the Masisi either as a brave or foolish man for ever daring to go against South Africa’s regional hegemony.’ At the same time and applying the same, history will also judge President Ramaphosa as a brave or foolish man for having been bulldozed by a country whose economy substantially depends on his. I am prepared to be persuaded otherwise as always. Judge for Yourself!

We are not out of the woods yet. Health protocols are still our only available best defence to fight against the Covid-19 pandemic. Wash your hands with soap and clean water frequently, ensure social distancing and continue to wear your masks at all times. Send your views to: adamphetlhe08@gmail.com