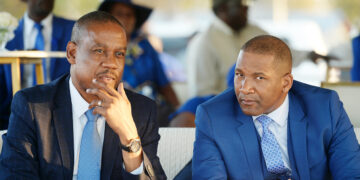 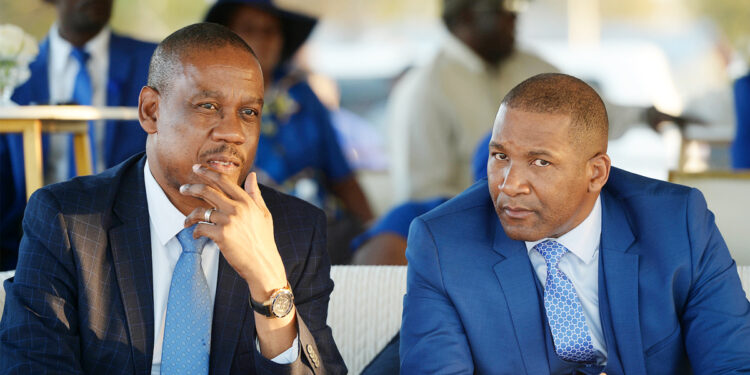 Boko and Saleshando are wise enough to save UDC- Analyst

Umbrella for Democratic Change (UDC)’s National Executive Committee (NEC)’s determinations to reconcile its President Duma Boko and vice president Dumelang Saleshando has hit a brick wall after the latter rejected an effort by the leadership.

The Patriot on Sunday is reliably informed that UDC president Boko is a disappointed man after Saleshando, who is the President of Botswana Congress Party (BCP), declined to honor the UDC NEC meeting convened last week Thursday in Mahalapye.

According to sources, Leader of Opposition (LOO) in Parliament -Saleshando, opted to attend the meeting virtually as he does not see eye to eye with Boko who is under pressure to save the UDC. “The acrimonious relationship between the two coalition leaders has caused lot of anxiety on the UDC NEC and its reconciliation efforts have failed. Boko and Saleshando have not been on good relations terms for a long time now. As a result of the forthcoming crunch opposition cooperation talks, UDC NEC called on Boko and Saleshando to smoke peace pipe but to no avail,” confided a source.

It is said that the leadership of other two contracting partners BNF and Botswana Peoples Party (BPP) in the past didn’t attend the UDC central committee meetings without issuing an apology to BCP. Also, those in the know how say that BCP central committee led by Saleshando is said to be fed up of insults hurled to UDC vice president particularly coming from some of BNF youth activists.

The norm by certain BNF activists identifying themselves as Fear Fokol have been cracking whip on Saleshando and BCP on social media, a move which BCP leadership is linking to BNF leadership.

Efforts to contact both UDC leaders Boko and Saleshando for comment proved futile at press time. BCP Secretary General Dr Kesitegile Gobotswang said the meeting was virtual as far as they are concerned. “The only problem is that although the meeting was scheduled to start at 1000hours we received the link around 1100hours. We then requested to shift the time to 1230hours so that we could reach internet connectivity. When I joined the meeting members were discussing agenda item 6 on media interviews and leaks by some members of UDC NEC. We had difficulties being part of a meeting that locked us out most of the time,’’ said Dr Gobotswang in an interview on Friday.

He said that it is not true that only Dumelang Saleshando did not attend the meeting physically. “I didn’t on account of constituency commitments as well. Motsei Rapelana did not attend physically either. She is on isolation as a COVID contact person. Dennis Alexander was not successful in joining the meeting virtually. At a personal level there is no toxic relationship between the UDC President and his Deputy. However, we cannot deny that there are the differences over critical issues of UDC governance,” said BCP SG who is also the BCP vice president.

According to Gobotswang, there is no existing toxic relationship between BCP and BNF either.

A Political and Administrative Studies lecturer at University of Botswana (UB) Dr Adam Mfundisi said Political coalitions are problematic as they have their own trials and tribulations on the way. He said forming, joining, and building political coalitions is a tall order demanding strategic leadership.

“The major objective is to build a coalition that possesses power and influence that as individual entities are not able to gain. Political coalitions can share resources, increase membership, provide diversity to the formation, and parties can learn from each other thereby broadening their knowledge and skills. On the flip side, political coalitions create conflicts between and amongst partners,” he said.

“The conflicts are a natural phenomenon in organizations and how they are resolved is what matters. The leadership must rise above all these challenges and show direction. Acrimonies in the top echelon of political coalitions send dangerous message to the rank and file. Emotional intelligence is critical in dealing with squabbles and disagreements within coalition partners,” he added.

Also, Dr Mfundisi said the impact of continued instability within UDC affects opposition politics. “Many people are dissatisfied with the BDP government and leadership and look for alternative formations to vote. Public trust and confidence may dwindle for opposition politics if the status quo remains. Both Boko and Saleshando must show political skills to resolve the conflict within the UDC particularly involving their respective political parties,” said the veteran political lecturer.

According to him, both experienced UDC leaders Boko and Saleshando must communicate effectively with their followers, by words, symbols, actions, and personal example as well.

He buttressed that political skill and emotional intelligence of both leaders can save the UDC from fragmentation and eventual collapse of the political coalition warning that the bad blood the BCP and BNF will negatively affect the performance of the UDC as they are powerful in UDC.