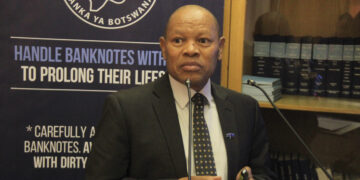 Bank of Botswana (BoB) defeated the Covid-19 pandemic odds in 2020 by recording Net Income Interest worth P8.816 billion reflecting a significant growth compared to the P6.941 billion in 2019.

The central bank disclosed this during the launch of the 2020 annual report.

Chief Financial Officer at the BoB Daniel Loeto said the Bank recorded net income of P8.8 billion in 2020, of which its P2.9 billion was net distributable income paid to Government as well.

Loeto noted that net income is higher mainly on account of net currency gains of P2.9 billion in the current year as compared to P752 million losses that was recorded in the bleak year of 2019.

BoB Chief Financial Officer went on to say that pre-set dividend of P840 million was distributed to the government, adding that the distribution formed part of the P2.9 billion paid to government.

“P1.3 billion interest and dividends were earned on investments in 2020 compared to the P1.8 billion in 2019. Administration costs increased from P601 million in 2019 to P621 million and it was due to 2020 salary adjustments made to the staff,” stated Loeto on financial performance.

Furthermore, Loeto indicated that the bank assets stood at P54.5 billion in 2020 compared to P66 billion in 2019, noting that the decrease on assets was as result of decline on foreign exchange reserves.

The foreign exchange reserves, according to Loeto, decreased by 18.2 percent from P65.2 billion in the previous year to P53.4 billion in 2020, with the decline attributed to subdued economic activity.

Regarding liabilities, he said the balance on government investment account decreased from P18.3 billion to P3.3 billion, adding that banks were generally resilient amid Covid-19 pandemic.

He indicated that the local banking sector continued to support economic activity including through loan restructuring and restructuring moratoria as part of accommodative monetary policy.

BoB Governor Moses Pelaelo said Botswana’s economy is at a critical juncture where mineral-led and public sector growth model can longer generate sufficient growth, at least an average of 8 percent per annum over the next 15 years, to address the current development imperatives.

“Furthermore, a key driver of economic and welfare prospects for Botswana, namely, the export potential has, over the last few years, faltered and shrunk as a proportion of the GDP; therefore, there is an urgent need to diversify sources of growth, including redesigning the country’s industrial and trade policies to promote exports in non-traditional sectors, attraction of foreign direct investment specifically targeted and linked to integration into regional and global production value chains; and strengthening export and investment promotion agencies,” he added.

The central bank is worried that the surge in Coronavirus cases will dent prospects of economic recovery, which is pinned on the successful Covid-19 vaccine rollout.