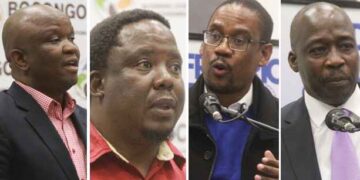 UDC lead in battle of manifestos

UDC lead in battle of manifestos 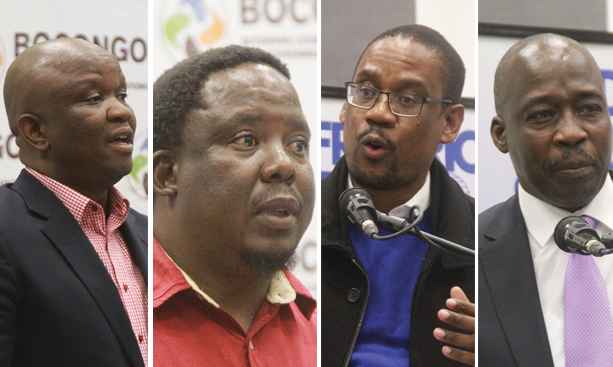 With only three months left before the much anticipated 2019 general elections in October, political parties have been hard at work launching their manifestos to electorates, pulling  all stops to lure potential voters to their camp.

Four political parties, Botswana Democratic Party (BDP), Umbrella for Democratic Change (UDC), Alliance for Progressives and Real Alternative Party (RAP) have so far launched their manifestos while the embattled Botswana Movement for Democracy (BMD) is yet to present anything to potential voters.

As an endeavor to stimulate voter education, Botswana Council of Non-Governmental Organisations (BOCONGO) in partnership with the democracy assessment body, Friedrich Ebert Stiftung held the battle of manifestos panel discussion on Thursday.

The panel discussion manifesto battle, held under the topic ‘’Job creation and fight on Corruption’’, brought together the four political parties representatives to unpack their manifestos on what promises they have for the voters going towards 2019 elections.

The political parties have since started the campaigns although political analyst Leonard Sesa has observed that the campaign vibe in this year’s elections started on low note as compared to 2014 elections.

Here is a glimpse of how the parties have been campaigning.

The opposition coalition led by Advocate Duma Boko mounted in a serious campaign in April when the opposition leader used the chopper to fly covering over three constituencies on daily basis.

The ruling party has endured a very little campaign towards the general elections with more campaign was only done in the race towards Kang elective congress where president Masisi was being challenged by Dr Pelonomi Moitoi for the party presidency.

As it was anticipated that the campaign heat has intensified, the AP also unveiled its two campaign buses back in April two do door to door campaigns across the country with currently little or no activity taking place.

The Ndaba Gaolatlhe led movement has also been launching its parliamentary and council candidates across the country as an effort to lure the votes come the Election Day.

Real Alternative Party is still yet to mount a serious campaign although the party has officially launched its manifesto recently in Gaborone.

As the elections season nears, its peak some of the political environment is grappling with some political stand offs, a move which observes pin points as the turn off to voters amid low voter registration turnout.

This has come out as long standing feud between president Masisi and his predecessor Ian Khama with the war catching the attention of the international community.

Another political squabble between the opposition coalition UDC and BMD is before the courts of law with BMD challenging the legitimacy of being expelled from the coalition.

UDC took the decision to expel the BMD led by Sydney Pilane after it was accused of acting against the interests of the UDC.

BMD then moved to file court case against UDC citing unfair dismissal from the coalition which the BMD president Pilane believes is the project pioneered by his party more than any contracting partner.

The UDC, BMD case has been postponed to August, only a month before the election period leading to more confusion among some of the UDC coalition supporters.

Another unstable political space has been dominated by the collapse in possible unity talks between AP and UDC ahead of the elections.

AP has contended that it gave UDC February deadline to respond to its demands centered on the working relations hence UDC missed the then February 28th set ultimatum by AP.

In addition, there are some elements of nemesis between the two political sides as this was evidenced by the snubbing of AP manifesto launch by UDC despite AP extending invitation to all individual coalition contracting partners.

AP Secretary General has then explained the UDC snub to have culminated from Pilane’s invitation at the AP manifesto in April, however, UDC spokesperson then denied the snub saying that UDC had other activities on the same day AP launched.

The ruling party has launched its manifesto which has since received public backlash with regards to it lacking clear targets or goals in job creation.

BDP representative Professor Thapelo Otlogetswe says he remains optimistic that his party will create sustainable jobs in areas of agriculture, tourism and the arts sector.

He said for their manifesto to be lacking targets it will not anyhow haunt the BDP going forward adding that the neglected living wage bill is not a matter of concern as well.

With regards to corruption Otlogetswe noted that the BDP government is up in arms to fight corruption charging that the Declaration of Assets and Liabilities Bill as it has been promised by Masisi will be passed in the July parliament seating.

UDC in its manifesto promises to create 100 000 jobs in the first year as well as introducing P 3 000 minimum wage should the party be voted in power after the October polls.

Quizzed on how the party will manage to create the jobs, Saleshando equipped that UDC will generate jobs through construction and manufacturing sectors which he also says they can contribute large to the GDP.

“Our target as UDC of creating 100 000 jobs is very practical and possible because as the party we are clear that we will localize the jobs such as stopping sending of minerals processing outside Botswana. We will also create jobs through the industrial hemp which its economic value is being enjoyed in our neighbouring countries such as Malawi,” he said.

Saleshando further said the independence of oversight bodies such as DCEC is how the UDC intends to fight abrupt corruption as it is now influenced by the government in executing its mandate.

Lerubisi noted that RAP in quest to fight corruption will ensure that capital punishment is administered on those who commit corruption, sending the attendants into laughter.

The party in manifesto pledges to shrink unemployment from 20% to less than 10% by positioning Agriculture as one of the top four lucrative contributors to the GDP.

AP’s Gaborone North parliamentary candidate Thatayaone Molefhi who represented the party at the manifesto said they intend also to drive non-mineral exports to at least 40% of GDP.

The decision by the government to lift the hunting ban on elephants caused uproar especially from the western international community blasting Botswana for the decision.

Conservationists around the world have reacted with outrage and concern to a decision by Masisi’s government to lift its ban on elephant hunting.

Masisi however decided the government’s decision when he was in the official state visit in USA saying that the hunting ban will be highly controlled and monitored.

The meat commission has been one of the dominating discussions in the previous parliamentary session due to its declining state in terms of making profitability.

State owned enterprise has been a source of discussion or campaign score for most politicians with some calling for the privatisation of the commission while others opposed the move.

BMC recently some few months back was slapped with a heavy P 40 million law suit by prominent cattle baron Patrick Balopi who wanted BMC to pay his dues for feedlot services.

Two weeks back it has been announced that BMC struck a deal with China to export beef to the Chinese market with BMC officials remaining confident of the recovery by the loss making ridden commission.

Former president Ian Khama has of recently come out as talk of town due to his mounting tension against his predecessor Mokgweetsi Masisi.

Permanent Secretary to the president Curter Morupisi last week called a media briefing under which he expressed the government’s dissatisfactions with regards to Khama’s post-presidency conduct.

Khama’s fall out with his party BDP led to him being linked with a working relationship with the opposition coalition UDC, a move which brought restlessness among some members of the party.

The Bangwato Kgosi Kgolo held two consultative kgotla meetings in Serowe where in the last meeting decided to part ways with ruling BDP vowing to decampaign some of the party members ahead of the elections.