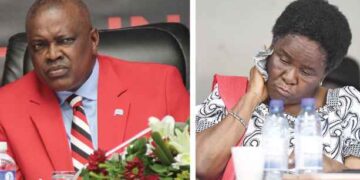 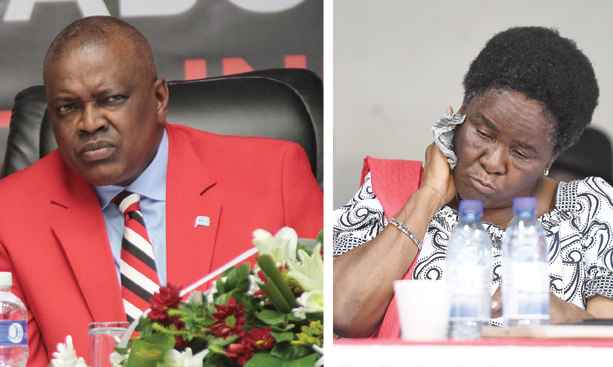 Second born due in few weeks; as some pray for a still-born

Deep inside the leadership of Botswana Democratic Party (BDP) knows that things are pretty ugly and could go terribly wrong in three weeks’ time when they meet in Kang.

The polarisation in the party is so much that some have begun packing their luggage to assume a new political life under a new banner – such is the intensity of mistrust that border on tribal lines and have only been worsened by a threat that 29 of those seen to be delinquents for belonging to a different camp shall be facing disciplinary procedures after the party special congress.

This therefore means that on the sunset of her fertility at 57 years, the BDP is on the verge of delivering a new offspring. This will be the party’s second born after the split that saw the birth of Botswana Movement for Democracy (BMD) in 2010.

Similarly – just as with the BMD – the new offspring would have at its centre an issue to do with former President Ian Khama. BMD founders loathed Khama, hating in particular the way he had treated then party secretary general Gomolemo Motswaledi whom he suspended and banished from contesting the 2009 General Elections as Parliamentary candidate for Gaborone Central.

If the new party comes to live, it will be primarily for the followers’ deep-rooted love for Khama – whom they see as ill-treated and abused by his successor. Their love for him will not allow them to see his abuser retained in power and at best they will have to break away and go with seats that will ultimately force the BDP and Masisi in particular out of power. A coalition will be mooted with one of the opposition parties.

Point of no return

Just as was with the formation of the BMD, members who have been summoned for Disciplinary Hearing at Tsholetsa House will not show up. In fact, immediately things do not go their way in Kang, they will not even attend the National Council as they would have some urgent business to attend to. Sources are adamant that this grouping will not waste their time at another party when time runs out for theirs.

“As things stands there is no point of return – a new party will be formed and contest about 15 constituencies mostly in the BDP stronghold,” intimated one of New Jerusalem leaders.

Currently NJ which its presidential candidate is Pelonomi Venson-Moitoi is trailing behind in terms of the nominations as most of the regions and branches have nominated President Mokgweetsi Masisi. The party is ready to register with the Registrar of Companies though the source was economical with the truth on what its name will be.

Last year in an interview with Weekend Post newspaper, former President Ian Khama confirmed that he was aware that a new party might be formed.

“I have heard of a number of things in the offering, but the formation of a new party is not something unusual. I can confirm, it’s been a while with rumours of a new party making rounds,” said Khama then.

This was even before Dr Venson-Moitoi declared her ambition to challenge Masisi for the party presidency.

Intelligence on the party

One of the reasons that the BDP Central Committee decided to combine both the special congress to elect the party president and the national council was after they were tipped of the impeding development.

“They were given intelligence information that the party will split. Moving to combine the main events was to be able to assess the damage and map way forward,” revealed an inside source. Both the special congress to elect the party president and National Council are slated for April 5th to 7th in Kang.

Sources within the party have revealed that their manifesto is already ready and will be launched when the new political baby is being delivered. The launch of the party is expected to be done either in Francistown or Serowe sometime beginning of May.

One of the senior Ngwato royal members (name known to this publication) who did his studies and training in Israel is expected to contest the Serowe South parliamentary seat. The youthful royal blue blood will face another young parliamentary candidate Lesedi Phuthego. The incumbent Pelonomi Venson-Moitoi is not seeking re-election.

Former MP for the area Brigadier Ndelu Seretse has recently declared that he will contest as an independent candidate in the constituency. Seretse –a member of the royal family – lost the primary elections to the incumbent Kgotla Autlwetse in 2013 and didn’t contest the BDP 2018 primary elections. Seretse is one of the BDP members who have been summoned for disciplinary hearing after they attended the Lady Khama hall meeting recently which was not sanctioned by the party.

No candidate has been named to challenge the incumbent Tshekedi Khama in the constituency and it is not clear if he will cross to the new party. This is one of the constituencies they are targeting.

The constituency is under the radar of the NJ which is expected to take a new shape and name after the Kang congress. The incumbent Member of Parliament Prince Maele, who recently openly showed his support for the former president Khama, is not clear if he will cross to the new party. His constituency is one of the targeted ones.

This is also viewed as the heart of the new party with area MP Master Moiseraela Goya though having not publicly declared his allegiance. He is one of the few cabinet ministers who has defied the instructions and accompanied former president Khama when he visited his constituency.

While former President Khama’s blue-eyed boy Tshepang Mabaila who has been slapped with 5-year suspension returned to the party this week and pledged his loyalty to President Masisi it is not clear which side he would fall should a new party be formed. Some suspect he might go with the new movement.

Currently held by the militant and outspoken assistant Minister of Health and Wellness Biggie Butale who lost the primary elections to chairman of the BDP Youth Wing Simon Moabi, the constituency is viewed by the NJ as theirs. Butale, who has been vocal and recently slapped with a letter for disciplinary hearing after being accused of campaigning in the constituency, is likely to contest under the new party. But he has recently declared that he will never join any other political party. Time will tell if he will stick to this as the political ball game rolls on.

This is another constituency which they are confident they could snatch after primary elections left some democrats disgruntled. The incumbent MP Vincent Seretse lost to Wilhelmina Makwinja after she appealed the first outcome of the results. It is not clear whether the NJ will rope in Seretse as their candidate.

Currently held by their leader Samson Moyo Guma, the constituency is regarded as their stronghold and will ensure that they snatch it in the 2019 General Elections.

Since 2015 the MP for Shoshong who is also Assistant Minister of Youth, Sports and Culture Development Philip Makgalemele has been consistent in standing on the side opposing President Masisi. At both the Mmadinare and Tonota elective congresses he was on the opposing side. It is not clear whether he will take a similar political move that he made in 2010 when he defected to Botswana Movement for Democracy (BMD) but later somersaulted.

DISS CLOSES IN ON KGOSI

DISS CLOSES IN ON KGOSI