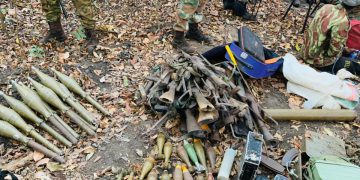 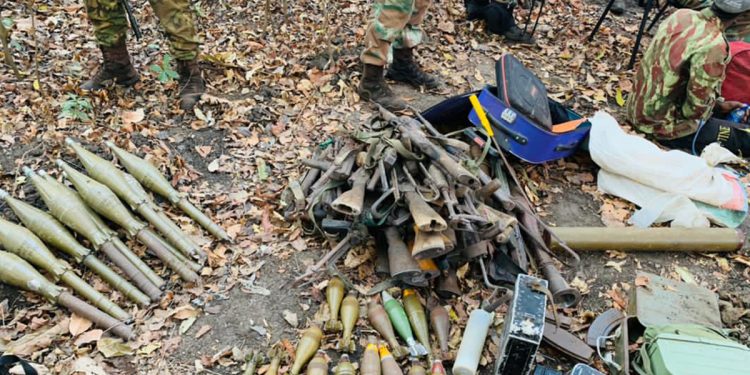 In support of Forḉas Armadas de Defesa de Moḉambique (FADM), SAMIM forces launched an offensive operation on 24th October 2021, which led to the capture and destruction of three Al Sunnah wa Jama’ah (ASWJ) terrorists’ bases North of Lake Nguri and River Muera in Macomia District, Cabo Delgado Province.  During this operation, SAMIM forces rescued eight women and five children believed to have been abducted by the terrorists. The victims are under the care of national authorities.

Moreover, SAMIM forces confiscated weapons from an arms’ cache that included RPG 7 launchers, 60mm mortars, PKM Machine Guns and AK47 rifles amongst others. Notwithstanding, SAMIM Forces continue to dominate and pursue the insurgents in the area as they have now been dislodged from their main bases South of Messalo river and fleeing north of the river where there are other suspected bases.

On an unrelated note, on 09 November, the SAMIM Force Commander Major General Xolani Mankayi, had an honour to bestow ranks on Lieutenant Colonel V.M Kaneno from the Democratic Republic of Congo who has been promoted to the rank of Colonel. Lastly on behalf of SADC; the Head of Mission, Force Commander and the rest of the SAMIM Forces wish the Government and the People of the Republic of Angola a happy Independence Day! Feliz Dia da Independência de Angola.

SAMIM forces in support of the Government of Mozambique together with Rwanda Security Forces continue to create conditions necessary for a return to normal life in the Province of Cabo Delgado as it pursues the insurgents. SAMIM would like to assure the people of Mozambique and SADC of a collective commitment to achieving a peaceful, stable and secure Cabo Delgado as well as the entire country of Mozambique.