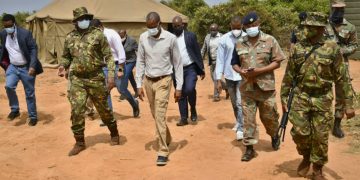 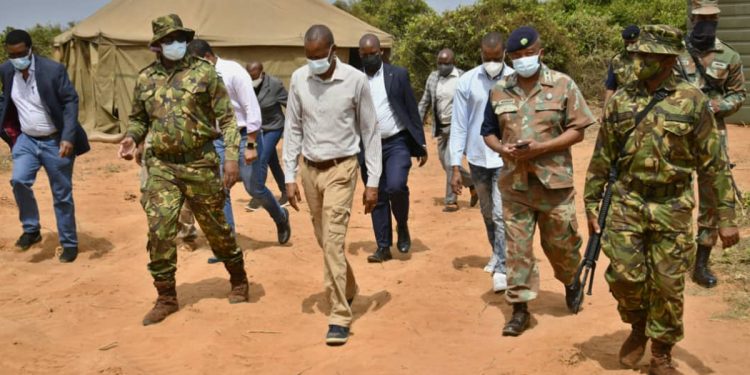 The SADC Executive Secretary, His Excellency Mr Elias Mpedi Magosi conducted an official visit to the SADC Mission in Mozambique (SAMIM) from 27th to 31th October 2021. The purpose of the visit was to pay a courtesy call on His Excellency, Mr. Filipe Jacinto Nyusi, President of the Republic of Mozambique and also appreciate the progress and how to exploit the gains made by the Mission in Mozambique. The Executive Secretary (ES) also held meetings with the Minister(s) of International Affairs and Cooperation and Interior to appreciate the official government position regarding progress made in fighting the terrorists in the Cabo Delgado Province. In these engagements, the ES was informed of the relative stability that has returned to the province due to the combined efforts of the Rapid Deployment Capability of the SADC Standby Force (RDC SSF), Forḉas Armadas de Defesa de Moḉambique (FADM) and the Rwanda Security Forces. Following these gains, the Government of Mozambique launched the Cabo Delgado Recovery Plan that is anchored on humanitarian assistance, infrastructure recovery and economic and financial activity.

His Excellency Mr. Magosi took the opportunity to engage with Mozambique’s international multilateral cooperating and bilateral partners such as the European Union, United Nations and the United States, respectively. In the various engagements, it became evident that the different agencies, in partnership with the Government of Mozambique, are involved in training and capacitating FADM, rolling out humanitarian assistance, resettling returning Internally Displaced Persons (IDPs) and rebuilding the Cabo Delgado province.

The Executive Secretary accompanied by the Head of Mission (HoM), Prof Mpho Molomo, and senior officers from the Secretariat visited the Offices of HoM and the Regional Coordination Mechanism (RCM) based at Malhampsene Township in the greater Maputo area, where he appreciated opportunities and challenges of the Mission. In his consultative schedule, Mr Magosi proceeded to Pemba, the Provincial capital of Cabo Delgado, where SAMIM Force Headquarters is located. On arrival, he was welcomed by the Secretary of the Province of Cabo Delgado who informed him that the good work of SAMIM has restored stability and some of the IDPs were returning to their homes.

At the SAMIM Force Headquarters, the SAMIM Force Commander, Major General Xolani Mankayi briefed the ES on the progress made by the RDC SSF since its deployment in July 2021. The ES toured SAMIM Force Headquarters and all locations in Pemba. In his address, His Excellency Mr. Magosi, commended SAMIM forces for their professional conduct in executing their mandate in Mozambique. He apprised them of the high accolades from International Cooperating partners and the Government of the Republic of Mozambique of their professional conduct and urged them to continue being a beacon of hope for the people of Cabo Delgado Province and Mozambique in the fight against terrorism.  Furthermore, the ES pledged utmost support to the Force Commander and that the SADC region will ensure the success of SAMIM.

On another note, SAMIM forces also had visits from Chief of General Staff, Forḉas Armadas de Defesa de Moḉambique (FADM) General Joaquim Rivas Mangrasse and the Deputy Commander, Botswana Defence Force Major General Mpho Mophuting in the same week of 25th to 31st October. The two Generals had an opportunity to visit the forces in the operational area and appreciated the conditions the troops were facing against the terrorists. The Generals urged SAMIM forces to do their best and make the region proud by degrading the terrorists and stabilising the Cabo Delgado Province with the ultimate goal of achieving peace in Mozambique and the region.

Subsequent to his visit to SAMIM forces, His Excellency the ES concluded his tour of the mission area by paying a courtesy call on the Minister of Foreign Affairs and Cooperation Her Excellency, Mrs Verónica Macamo Dlhovo where they exchanged notes and had a debrief of ES’s tour, highlighting the gains and challenges of the mission, as well as the way forward.

SAMIM would like to assure the people of Mozambique and SADC of a collective commitment to achieving a peaceful, stable and secure Cabo Delgado as well as the entire country of Mozambique.