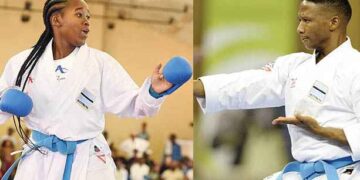 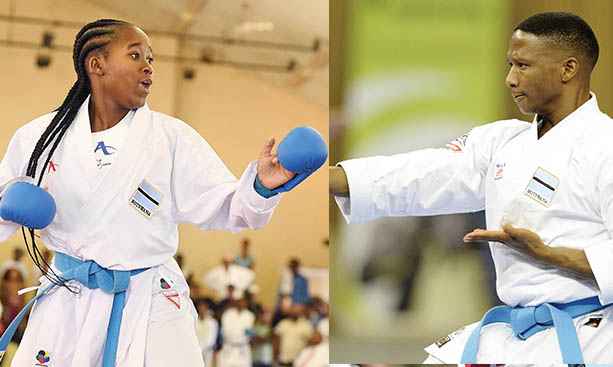 Sensei Ofentse Bakwadi and Entle Maungwa will get an opportunity to fly the Botswana Flag high when they compete at the World Beach Games in Doha, Qatar. The competition, which is first of its kind, runs from October 12 to 16. The duo qualified for the competition after their achievements at the 2018 Africa Karate Senior Championships which were held in Kigali, Rwanda.

Bakwadi won a silver medal in the Men’s Individual Kata while Maungwa secured a bronze medal in the Ladies Kata. The duo is accompanied   by Coach Christopher Ponatshego who has been at the helm of the national team for some   time.

The multi-sport event is organised by the Association of National Olympic Committees, but admits only Individual Kata in Karate living out kumite.

In June the duo debuted  at the  Africa  Beach games  where  they  managed  to win  bronze  medals each. Bakwadi went on to  win silver  with  his team  Kata  while Maungwa settled  for  bronze  with her  team  kata which  means  the  two  know  what awaits  them  in  Doha.

So far Bakwadi has had a great season as he has been able to win a medal   in every competition he has attended this year.

The 2019 UFAK Championships  add  to the  list  of  tournaments  he  competed  in and his consistency was very  evident  when  he  won  two  bronze medals  from Individual kata and team kata. The very same thing happened at the All Africa Games when he emerged as a double   bronze medalist.

For Maungwa her success this season has been mostly with the Team kata other than on individual events. Just like Bakwadi, she managed to win a bronze medal during UFAK and All Africa Games.

Her individual success came through during Africa Beach games and Zone 6 Karate championships   where she won bronze medals respectively. Almost 1200 athletes from all over the globe are expected to attend the World Beach Games, participating in at least 22 sport codes amongst them volleyball, wrestling and handball.

Mohammed Khan wrote: Where is the real Mokgweetsi E.K.K Masisi…?